Breaking Free from the Invisible Prison that Enslaves Us All

This is something that I'm very passionate about because most people don't think about it. This myTake is about how humanity has been locked up in an invisible prison and how we can break free from it. This will be life changing for anyone who chooses to be set free. Please read to the end. It is life changing.

Once upon a time, a few thousand years ago, when the population was small, everybody was free. People lived out in the wild or built their own homes and lived in small villages. They went out every day to hunt and gather food. Everything was free. They had no rent or bills to pay. No food prices. No gas or electric. And nobody had to work for a living. But over the centuries the population got bigger and bigger, and somehow there came to exist rich people who built their own armies. These people became known as Kings and Queens and Emperors. They eventually took control of the land and created a load of rules that people had to live by. Anybody who resisted would be very quickly thrown into a torture chamber and executed. People now had to work for a living and pay taxes to these rich rulers and obey their rules. These rich people have since been ruling the world, creating a world that benefits the rich and not the poor.

The truth is, most people are not free, even in the Western world. We live in an invisible prison. For example, most people are in a job they don't even like to pay for a house that's not even their dream house. Most people spend most of their life working just to keep up with bills to make the rich even richer. But nobody should have to work just to keep a roof over their head. Having shelter is a basic necessary thing for our survival. But now we have to work 40-60 hours a week for it, whereas once upon a time it was free.

We are told by the government that we have to obey the law. The truth is, common law is the only law we have to follow. That is, do not cause any harm, injury, or loss to another human being or their property. But acts and statutes are not law. We don't have to pay taxes, or bills, or parking fines etc. It goes back to the birth certificate. It's a very deep and complex system, but if you want to know how most people have been duped into thinking they have to obey acts and statues, look up a man on youtube named John Harris and watch his video "It's All an Illusion." 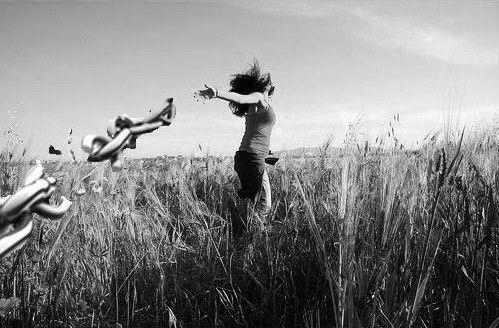 If I lived in the dark ages and disobeyed the King, what gives him the right to have me tortured and executed? Do I have to accept that the King has the right to have my head chopped off, or can I resist and stick my finger up at him? I just want to know where these people get the authority to invent a load of rules and force it on the rest of humanity. Let me explain why this is so important. These people in power, making all these rules, are destroying innocent people's lives, and we're allowing it to happen. A few examples:

1. Some years ago a young happy couple decided to live in the wild and build their own wooden house. It was beautiful. They had a baby together and were a happy family. But when the government found out they were living out in the wild, the government immediately sent people out to bulldoze their house down. True story.

2. Those in power are also suppressing natural cancer cures and allowing millions of people to die. The drug companies make approximately 300 billion dollars a year off conventional cancer treatments. Most natural cancer cures are very cheap. How do I know all of this? Well, there are thousands of testimonies of people curing their cancer with natural treatments. The human body is designed to heal itself if the immune system is strong. Doctors whop have used natural treatments to cure patients have either been jailed or murdered. And there are whistle blowers high up in the system who are now admitting that there is a conspiracy to suppress natural cures for cancer. And what's worse is that these people in power are now working to ban these natural treatments and get rid or organic farmers. Look up Monsanto and an organization called Codex Alimentarius.

So basically these people in power are killing millions of innocent people by suppressing cancer cures. So why on earth do we allow these people to control us through the government and police force? These people are the worst of criminals? For information about natural treatments, look up Dr Leonard Coldwell and Dr Lorraine Day and also read hundreds of testimonies of people curing their cancer.

3. Those in power are also involved in child trafficking. In the UK about 30,000 children disappear every year never to be seen again. I haven' got time to post all the evidence but research it yourself. Most of these children go missing from care homes, and they are being trafficked into child abuse rings where senior police, politicians, judges, and rich people are abusing these children. Then we have the state stealing people's children to reach targets and for money. This video should open your eyes:

4. And then we have liberals and other social justice warriors in the media, government, and education system telling us how to think and behave, what we should and shouldn't say. How we should be politically correct and not offend other people etc. Again, where do these people get their authority from? In certain places in the West, people are now being arrested and imprisoned for saying something "offensive" on Twitter or Facebook. WTF! Who the hell are these people to have other people imprisoned for expressing their freedom of speech? Why do we allow these people to have authority over us? What has happened to humanity? I for one refuse to tolerate it. It's like what Patrick Henry said: "Give me liberty or give me death."

So let me break it down to you. The world is run by rich and evil criminals who have heir own dark agenda. They allow millions of people to die by suppressing cancer cures. They have created a system where people have to go and work most of their lives in order to feed themselves and have a roof over their head. They are wrecking the economy and creating more poverty and unemployment, which is leading to more homelessness and suicide and depression. They are massively involved in child trafficking and child abuse. They fund illegal wars. And now they're attacking our freedom of speech. How can people be so blind to not see what is happening? What happened to freedom? I could say so much more but you get the idea. Let's not take this anymore.

Let us be free!

Show All
I think it’s ridiculous to have more than two children per family!
What I like the most about faith and religion and church
The Near Death Experience (NDE)

21
Click "Show More" for your mentions
Home > Society & Politics > Breaking Free from the Invisible Prison that Enslaves Us All
Most Helpful Opinion(mho) Rate.
Learn more

Cast Your Vote
Did you know Men and Boys are 80% of suicides?

PAcc92
Xper 2
Other
Popular Questions
Can teeth be a deal breaker if they aren’t 100% white and straight?
Girls, do you have a best friend that’s hotter than you?
Would you give up your royal status just for love?
Should #MeToo apply to lesbians that get raped by trans women?
Show All
Join with {0}
Loading...