My Tribute To The Veterans Of The United States Armed Forces 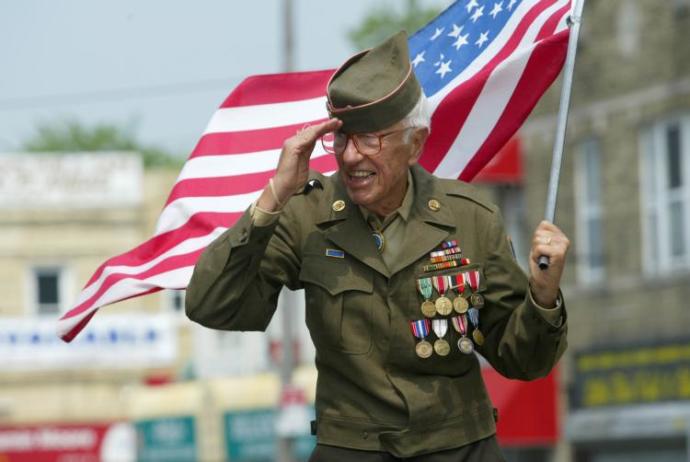 When President Ronald Reagan delivered his Berlin Wall speech in June of 1987, he accomplished something that no other president was ever able to accomplish. Indeed something no other leader has ever accomplished. He brought down the most powerful force for evil on the planet, the communist Soviet Union, without firing a single shot.

Just a year and a half after he uttered these words, as he continued to press his strategy of "peace through strength," vastly building up the US military after years of decay under the Carter administration, facing down evil with the assurance that it would be completely annihilated if it ever dared rear it's head to threaten free men, the Berlin Wall and the foundation of the communist world developed spreading cracks and then crumbled along with the Soviet empire in complete collapse.

What isn't as well known is the story behind the famous sentence President Reagan so brilliantly delivered that day:

This passage was in the original draft of the speech. But Reagan's "expert" speech writers removed the line on an early draft. It was too direct they said. It will cause offense. It will make them angry at us, it's not diplomatic, we need more diplomacy. (this sounding familiar?)

But Reagan insisted that it should stay in. That didn't stop the speech writers from removing it another SEVEN TIMES as President Reagan kept putting it back in.

In the end, while reading the final typewritten draft on the plane on the way to Berlin, President Reagan stubbornly wrote the sentence in by hand when he noticed it wasn't there. It was a sentence that will resonate through the ages as one of the most powerful messages in the service of liberty ever uttered. If you can watch President Reagan deliver this sentence without developing a tear in your eye, you have no soul. 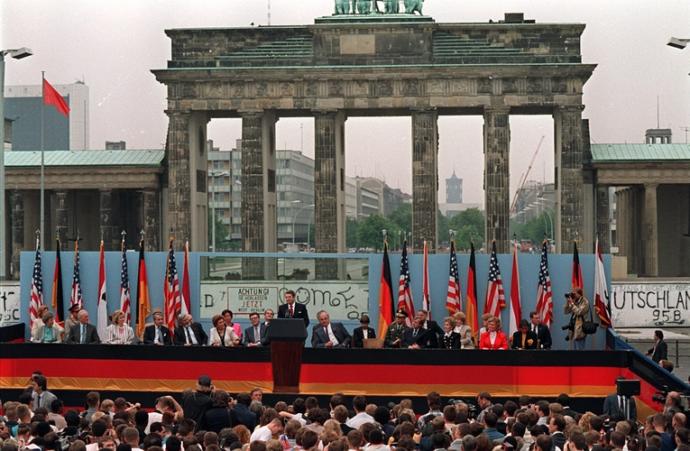 Thirty years later we are faced with a new nuclear threat coming from another evil empire. There are some in this country who seem to want to undermine our president today even as he is presented with a nuclear threat to our people that has been brewing for 25 years unchecked and was at the finish line the day President Trump took office. 25 years of failed negotiations, appeasement and "strategic patience," ended up in the Obama administration with an even worse result: the acceptance of failure and a the inevitability of a nuclear North Korea.

And now President Trump is faced with a seemingly impossible challenge: to prevent a madman with nuclear capabilities that are on the precipice of being able to strike anyplace on American soil from blackmailing the world or destroying entire countries including our own. It isn't a matter of decades anymore, not even years. It's a matter of months now before this madman will be capable of striking. President Trump was handed the football with 1 second left on the clock while the team was running the ball in the wrong direction. But this is no game. This is an existential threat to the entire nation.

What is President Trump's plan? I think he made it very clear as he delivered his own historical speech this week in South Korea: a speech that parallels and rivals President Reagan's Berlin speech thirty years ago in its clarity, moral righteousness and strength. He is echoing President Reagan's powerfully successful strategy of peace through strength. And no sane person should be doing anything but supporting President Trump as he attempts to do the impossible job that none of his predecessors could accomplish and with no time left on the clock. Your future, the future of your children and your children's children, indeed the lives of millions upon millions of innocent people depends on President Trump's success.

Like President Reagan, President Trump is a political outsider, mocked and feared by the entrenched political establishment that wants to do business as usual even in the face of the abject failure of the status quo.

If there is one lesson that mankind has learned, it is that the only strategy that evil responds to is strength. If you truly respect our military, if you want to minimize the possibility that they will have to die or be wounded in a foreign war, then you must do so through supporting a strategy of peace THROUGH STRENGTH, not capitulation or endless unfruitful diplomacy that ends in weakening our position as the unshakable moral leader of the world. There is a time for diplomacy and there is a time for action. This is the time for action. There are no other options left.

Godspeed President Trump. You were handed an impossible mission: to save the world from a tyrant with no time left to do it. But you are on the right track, you are doing what must be done, and we support you, we support our beautiful military and we support our beloved country with every fiber of our being. America WILL prevail.

Show All
What my enemies taught me about Mark 2
A Dizzy Edition Travel Guide (Part 1)
Call of duty mobile: a game that has become a shell of it’s former self (updated review)
10 Questions Guys Have Always Wanted Women To Answer

114
Click "Show More" for your mentions
Home > Trending & News > My Tribute To The Veterans Of The United States Armed Forces
Most Helpful Opinion(mho) Rate.
Learn more
Yes No

Cast Your Vote
WOW!!! Can it be NOW Thieves are Finding another Source to Target Goods from Delivery Trucks and Trains full of Packages?

Paris13
Influencer
Other
Popular Questions
Quick question: How is the dress?
When she/he asks: You.. (Pause) are you still looking, why do they ask this?
Are you a Nationalist or a Patriot?
Why do some women like to show more cleavage than others?
Show All
Join with {0}
Loading...